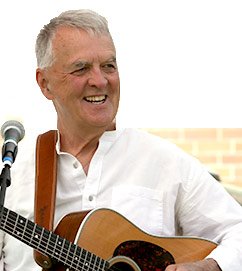 Paul Cathcart, our fearless leader, was born in Massachusetts, but spent most of his adult life in Virginia. His love of Bluegrass music was inspired by close friends and his many years living in Virginia. He was also inspired by Guitar Legends and singers, Tony Rice, Rick Faris, Ben Clark, Greg Blake, and Josh Williams. 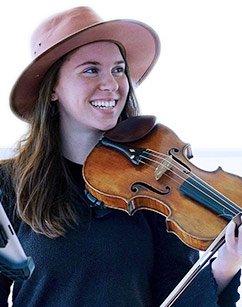 Sofia Chiarandini Wyner is an incredibly talented musician and singer. She has been playing violin since age five, and at age fourteen decided to dive into the world of bluegrass. She has performed on the main stages of bluegrass festivals such as Grey Fox, Ossipee, Joe Val, and Freshgrass.
Sofía is a graduate of the Berklee College of Music where she has performed as part of the American Roots Music Program. 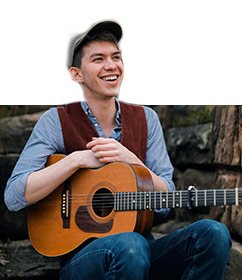 Micah Nicol grew up with a mandolin in one hand and a guitar in the other playing bluegrass and classic country music with his father. He’ll be playing mandolin and doing a lot of singing with us. He studied Music Production and Engineering at Berklee College of Music. Micah has a deep love for musical theater and content creation and lives parallel lives as an audio consultant. 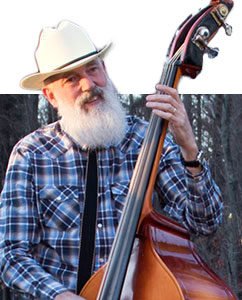 Neil Helme, also a graduate of Berklee,  is well known in Boston Music Circles and is one of the most talented bass players in the area.  He has played with great groups, like the Spring Hill Rounders, the Beantown Buckaroos, Honky Tonk  Masquerade, the Demolition String Band, Odessa Rose,  & The Smalls. In addition to his musical talent he brings great vocals and his extensive knowledge of bluegrass and country music. And we feature his song “Swimming Hole” in our sets.

Roger Weiss, our dancing banjo player, is known for his hot licks and cool demeanor. His major banjo influences are Earl Scruggs (of course), Eddie Adcock, and Lew London. When he’s not picking banjo at the usual places in Boston, you will probably find him Texas Two-Stepping to some country band.

We are sad to announce that our friend and band mate, Fred, passed away on May 9, 2018. You can read more here.

Having hosted two of your performances in 2014, I wanted to take a moment to thank these bluegrass musicians for their outstanding entertainment performance. Not only did the shows bring excitement for our existing customers, but some new customers as well. Having grown up listening to some Bluegrass favorites, it was great to hear them

The Sandy Ridge Boys are a fabulous blend of fine musicians, but they also are so much fun.  Can’t beat that mixture, Harmony and Humor; the best blend.  Bluegrass, Country – they can do it all.

The extremely talented Sandy Ridge Bluegrass band has been delighting our very sophisticated and educated independent living residents here at NewBridge on the Charles for a number of years now. I highly recommend this very fun and high energy group of musicians, especially to senior communities where listening to good music makes them so happy.

It was a beautiful, sunny summer day in Belmont.  At the Farmers’ Market, people were quietly doing their shopping.  Then the Sandy Ridge Boys started to play and the whole mood changed.  Folks stopped what they were doing to listen, gathered around the band, and tapped their feet to the music.  Everyone at the market

Thank you so much for bringing a breath of diversity into our ballroom. Your presentation, personalities and talent all speak for themselves. I am always trying to find new venues and I feel as though I really struck gold. You even won over the devoted classical aficionados and that’s no easy task!

The Sandy Ridge boys are a guaranteed good time. A group of  great musicians and good friends, their chemistry on stage makes for great entertainment. As a program supervisor,  I see many musicians and  they are a band I look forward to over and over again!

The Sandy Ridge Boys recently played at our Harvest Festival Benefit for Emerson Hospital in Concord MA. We had been looking for a new blue grass band for our festival and were thrilled with their performance! They were lively and kept the audience involved. Great entertainment and musicians. We will definitely invite them back to

The Sandy Ridge Boys…and Girl delighted a very Covid-weary crowd of seniors outside on the Town Green in Needham last month. Their upbeat, professional and engaging performance was the perfect remedy for a very difficult year of social isolation, frustration and fear. After their performance, emails and messages poured in saying how wonderful they were,

Super musically talented, entertaining, professional and beyond spectacular!…that’s what you get when you book a gig with the Sandy Ridge Boys. Their music and stage presence made our Bluegrass Hoedown catapult to another level in terms of energy and success. These guys are pros who come prepared and wow the crowd. Even those who aren’t